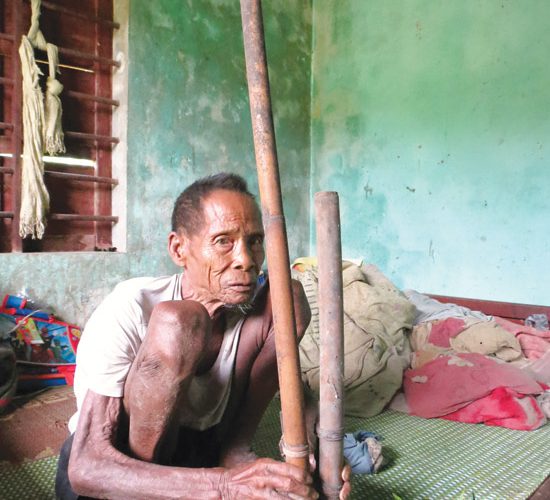 The mysterious witchcraft of the Ruc people

A close-up of the shaman’s tools

At the end of 1959, the Ca Xeng border guards, stationed in Thuong Hoa, Minh Hoa District, Quang Binh Province, Central Vietnam, during one of their patrols, saw a group of ‘forest people’, very timid and naked, who climbed cliffs and trees with the agility of wild animals.
After months of approaching them, the guards finally managed to persuade them to leave the caves and settle in Ruc Lan Valley, Thuong Hoa Commune. Since then, the Ruc have been known as the youngest members in the family of ethnicities of Vietnam. In 2013, after over 50 years of merging with the community, the Ruc were named in the list of 10 least-known tribes of the world.
To Mr Dinh Thanh Du, a researcher of ethnic cultures of the minorities in Quang Binh, who spent most of his time studying ethnic groups in the area, and to many others who have studied them, the Ruc people still remain a mystery.
Mr Du said that the Ruc have no family names and no tribal name. They live in caves that let water pass through, which are called ‘Ruc’ in the local dialect, so others call the people the Ruc. After anthropological and linguistics studies, scientists put them in the group of Chut people of Quang Binh, together with the tribes of Sach, May, Ma Lieng, and A Rem.
Before leaving the caves, there were 109 Ruc persons. They lived in isolation and ran away at the sight of strangers. Their life was completely natural. They lived in the high mountains, hunting and gathering. Both men and women tied their hair behind them, covering their bodies with antiar bark. They slept sitting.
Having left the caves over 50 years ago, the couple, Mr Cao Chon and Mrs Cao Thi Bim (80 plus years old), still keep their primal way of life. The government built them a house and gave them land to farm, but they don’t live there. They moved back to the caves, hunting and gathering in day time, then coming back to the cave to sit-sleep at night, despite the government’s and their children’s persuasion.
Mr Cao Van Dan, 39, head of Mo O O O village told us, not only the Cao Chon couple, but all of about 500 Ruc people still sometimes miss the caves. Every harvest season, many families move to caves to live for a few months.
According to Mr Dinh Thanh Du, the Ruc have retained very mysterious witchcraft rituals, unknown to other tribes; these include ‘blow open’, ‘blow close’, and ‘air cut’.
Mr Du told us the Ruc use blow close to ‘blow’ a spell into a woman so she can have sex without conceiving; they ‘blow open’ a woman when she wants to be pregnant. They use the air cut witchcraft to avoid wild beasts. In the forests, a Ruc needs only to murmur some incantation, and the tigers, leopards, even wild elephants won’t dare to attack them.
Mr Du relates that during a field trip he took with Dr Vo Xuan Trang, a linguist and folklore researcher, to learn about the Ruc witchcraft, Dr Trang almost died trying to test the power of the air cut spell. They went into a forest with an old Ruc man, and the Ruc warned them that they had to go at least five metres ahead of him. They should in no circumstances fall behind the Ruc man (who had at that moment already cast the air cut spell). But suddenly, Dr Trang intentionally fell behind, and he immediately fell down in convulsion, with blood foam on his mouth. The Ruc old man came back and murmured something. Only then did Dr Trang regain normalcy.

Mr Cao Van Dan, head of Mo O O O village, told us that nowadays, these rituals are no longer popular among the Ruc community. But some shamans can still perform them. Mr Dan and two border guards took us to a shaman named Cao Ong. The man was already in his 80’s, frail and unable to walk. But his mind was relatively clear. After several refusals, he finally agreed to show us the blow open and blow close spell casting. His tools were in a corner of the house, but no one dared to pick them up.
A while later, Mr Cao Ngoc En, Cao Ong’s brother, came and only he dared to bring out the tools and arrange them for a ritual. The tools included two bamboo tubes, one metre and 0.5 metre, one flat rock twice the size of a man’s palm, a bowl of water, and a bowl of flowers. Mr En said that there must also be a piece of beeswax for a candle, some incense and a hair or a thread in the water bowl.
Cao Ong squatted on his bed, holding the two bamboo tubes in his hands and rubbing them on the rock to make some low and high-pitched sounds. At the same time, he murmured an incantation to the tune and rhythm of the bamboo tubes and blew air in the water bowl. After about 30 minutes of this, the bowl was supposed to be given to a woman to drink who does not want to bear a child. And that was the blow close ritual.
Mr Cao Ong said that the blow open ritual was similar, but with a different incantation. He could also, he maintained, blow away bleeding wounds, snake bites and various diseases with different incantations. Besides the air cut trick for one person to avoid predators, he could also draw a circle with many people inside to block animal attacks. But when asked to reveal the content of the incantations and to translate them to Vietnamese, he shook his head, ‘That’s a sacred and forbidden thing that belongs to the Ruc only. Others are not allowed to know.’

Text and photos by Hoang Nam