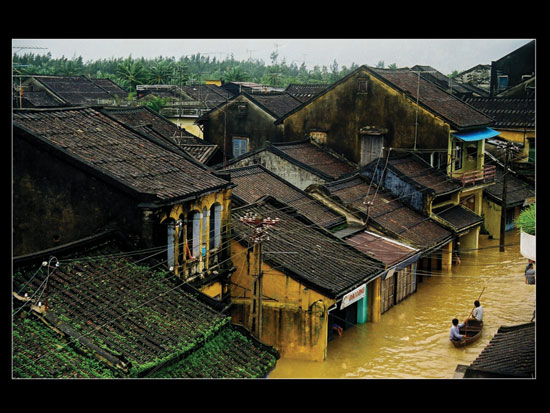 The tao of dryness

Each 9th and 10th lunar months, Hoi An faces flooding. It usually happens after a storm, when water gushes down from the nearby mountains, while the sea level rises and adds to the problem. Also, hydropower stations have also begun to flush thousands of cubic meters of water per second into the area.
Some have proposed to build low dykes around Hoi An to protect the town from floods. But the objections are that there is no budget for it, and the dykes would destroy the attractive, dreamlike beauty of the town. And so the authorities and owners of the historical site have decided to obey nature and live in harmony with the floods.
Hoi An looks out at Thu Bon River from streets running east to west. Bach Dang street lines one side of the river; behind it are Nguyen Thai Hoc and Tran Phu streets. The locals say that Tran Phu is the oldest one. Nguyen Thai Hoc appeared in 1840 and Bach Dang in 1878. Running north to south to connect these main streets are Hoang Dieu, Nguyen Hue, Hoang Van Thu, Le Loi and Nhi Trung streets and many tiny alleys. All these lead directly to the river.

The majority of the most important buildings are on Tran Phu Street. Among them are the club-houses of Chinese traders, built as a reminder of their home, standing out vividly. All these club-houses face toward the river. Hoi An dwellers say that the direction leads to Son Tra hillside; thus all the vitality of heaven and earth flows to the buildings.
Sitting in a coffee shop on Bach Dang Street at dusk or when the lanterns are lit, visitors feel as if they are in poetic Venice. This street is the first one to be flooded, and some years, the water climbs up to the first floor of two storey houses, and many households have to get out from the roofs to be rescued by boats.
Mr Ha Re, living on Bach Dang Street said, ‘Hoi An is at the lowest point around, how can it not be flooded.’
Alexandre de Rhodes, coming to Hoi An, noted that in 1624 and the year after that, ‘The rainy season raises the water in the river, causing floods.’ So floods have been the usual occurrence in Hoi An for hundreds of years. Living in an area prone to storms and floods, homeowners had to find ways to protect themselves from annual disasters.
To protect the houses from rains and storms, the tiled roof is the most important. Hoi An tiles are square, thin, slightly curved baked terracotta. One line of face-down tiles follows another, face up, and so on. They call this yin-yang roofing. When the whole roof is covered, they use cement to fix the tiles, making the wave-like roofs strong and leak-free.
Mr Nguyen Chi Trung, Hoi An Heritage Conservation Centre director told us, ‘The heritage remains as long as the roofs remain. During big storms that hit Hoi An, while the new house roofs on the outskirts of town were blown away, the centuries old yin-yang roofs stood firm, except for a few downgraded ones , which [were] only deformed a little.’

To live with floods, most of the houses on the ancient streets are two-storey, with trapdoors to help move things before the water rises.
Having lived with storms and floods for generations, the people of Hoi An remain quite calm when the high water season comes.
The town has 1360 ancient buildings, 1107 of which line the ancient streets, including dwellings, club-houses, shrines, temples and pagodas. 82,4 per cent of these are private or collective properties. That’s a large quantity, but the Hoi An Heritage Conservation Centre staff knows by heart every building and are constantly ready for rescue and support every time a storm comes. Mr La Vinh Dien from house no. 16 of Nguyen Thai Hoc said, ‘The Hoi An Heritage Conservation Centre staff know all the ins and outs of my house, even better than myself. Before the storm season they always come to give us slabs and poles and help reinforce the weak parts of the house. That’s why although the eye of the recent 11th storm passed Hoi An, this house remained safe; only a few lines of roof tiles were displaced.’
Mr Le Dung, 6th generation owner of Tan Ky house told us, ‘Hoi An old houses share side walls, making the whole street one single strong structure. Protected by yin-yang tile roofs done with good workmanship, storms are no big threat. However water sucked into walls is like a chronic disease. Each flood leaves it hidden impact in every house, every wall, every pole, helping termites multiply. The biggest flood I have seen came in 1964 when I was only 11. Sitting on the first floor, I could reach down to the water with my hands. That year the water remained high for a whole week. We ran out of provisions. But these days we have power generators and motored pulleys, so staying longer upstairs is possible…’
One wall in Mr Le Dung’s house is not repainted to keep water marks of the floods. The next wall is covered with visitor cards and impression notes left by tourists from all over the world. The wall is a message from the people of Hoi An, saying that they can accept and cherish everything, from the good feelings of the visitors that come to appreciate their centuries-long way of life to the real threats from the nature that come with every storm season.n