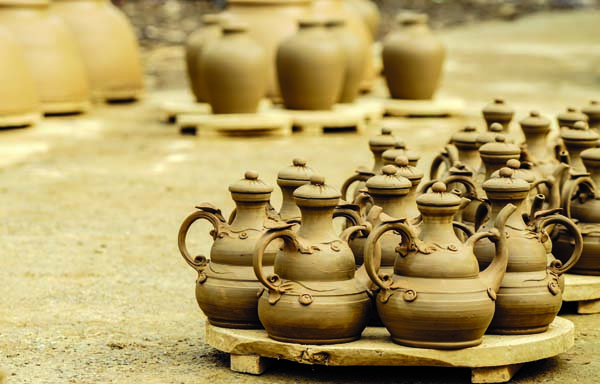 The Tao Of Pottery

One afternoon wandering and asking around in Gia Thuy Ccmmune, Nho Quan District, of Ninh Binh Province, I learned quite a few things about the age-old local pottery trade. They say that in 1959, some pottery workers moved here from Thanh Hoa and opened kilns to make simple things such as pots, jars and , cauldrons…. Thus, the pottery trade was born in Gia Thuy and remains there till today.
In the 5,000m2 premises of the Gia Thuy pottery cooperative, groups of workers are busy with their assigned tasks at their workstations. At the entrance, someone is breaking dry clay to soak and sieve for fine clay. At the turning tables, other workers create initial forms of jars, pots and other utensils. In another corner, some women assemble parts into recognizable products and put them out to dry before painting, drying again and baking.
Gia Thuy pottery products seem as rudimentary as the earth itself at the first glance, but are quite sophisticated in details. To make a 100-200 litter jar, a worker has to complete many different steps from forming different parts of it, assemble them, press and plaster to make it tight and smooth, paint and decorate, and finally bake it. Every step requires diligence, skills, meticulously, and artistic instinct. Gia Thuy pottery is baked continuously for 2.5 days on a wood fire to become brown-gray and as hard as glazed terracotta. At a glance, it’s clear that Gia Thuy pottery products carry all the five basic elements: Wood that burns, Fire that bakes, Water that makes the clay soft, Earth that bears the clay, and the Metal feel on the surface.The elders at the kilns say that the products they make do sell, but much less than before because of the competition of plastic products and cheap Chinese pottery. However in an effort to keep the kilns burning, Gia Thuy pottery cooperative is looking for new directions of future development such as releasing into the market eye- catching, fashionable decorative items.

Text and photos by Manh Ha