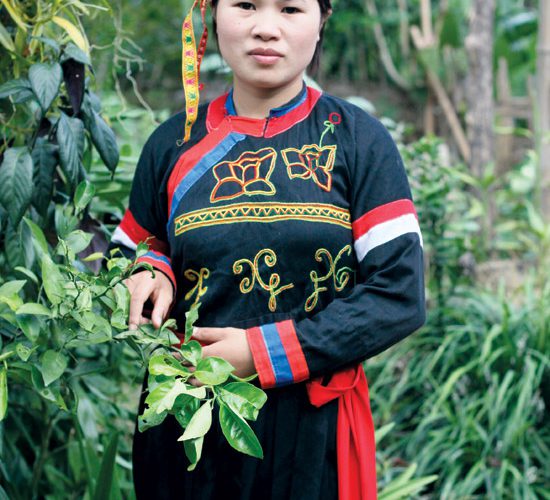 The Thuy, people of the sacred stone

I visited Thuong Minh Village and met an old shaman, Ban Van Kim. Mr Kim was 80 and the oldest Th?y person. He was small and spoke little Vietnamese.
Mr Kim said the Th?y had migrated from China about 400 years ago because of war and disease. They had been part of the H’mong and because they had always lived near springs and rivers they had been called the ‘water H’mong’. ‘Th?y’ means ‘Water’ in Vietnamese. The Th?y had first chosen Ha Giang, the northernmost province of Vietnam, on the border with China, to settle at the end of their migration. Only about 80 families, with a few hundred people, out of a thousand had survivied.
Barriers of language and custom had forced the Th?y to live separately and they had married within the tribe. Difficulty in making a living, lack of genetic diverdity and diseases of the forest had reduced the population. After 1945, the Th?y had moved to Tuyen Quang Province, which borders Ha Giang, and there had been only 13 of them, in three families, the Ly, Mung and Ban.
Today the Th?y, who lived in Thuong Minh Village in Hong Quang Commune, Lam Binh District. Now numbered 92 and had been able to survive, Mr Kim said, because they had been protected by gods. Gods resided in stones that the Th?y considered priceless, sacred treasures. Mr Kim went to his kitchen and brought back a box covered with a piece of red cloth containing a stone the size of a fist. It resembled a river stone and there was a hole through it. Mr Kim said he had received it from an ancestor and it would be kept only by a prestigious member of the tribe.
Mr Kim said that the Th?y had used to have another sacred stone, when they were in their original place. The Water-H’mong had been a strong tribe and other tribes had looked at them with envy. The original stone had been stolen and it magic removed. This had led to the decline of the tribe and its flight south to Vietnam.
In Vietnam the Th?y had sought and found a new stone and organised a ceremony to invite the gods to live in it.
Mr Ly Van Lam, chief of the Health Department of Hong Quang Commune, said the Th?y believed people got sick when a ghost entered them and caused trouble. The only thing they could do was call for a shaman to use the sacred stone to drive the ghost away.
Hong Quang Commune has more than 3,000 people, in seven tribes, including the H’mong, Th?y, Dao, Pa Then and Kinh. The Th?y have given up restricting marriage to within the tribe and mixed marriages are the majority.n

Text and picture By Phuong Linh