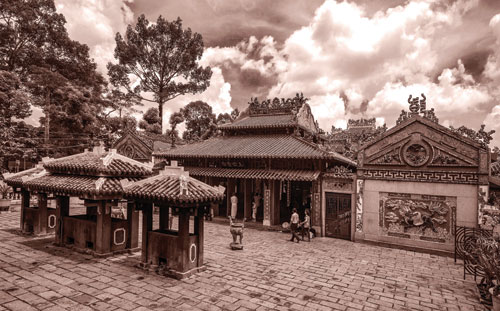 The tomb that became a monument

Rituals for the death anniversary of Le Van Duyet

Once the grave of a scurrilous rebel, the final resting place of Le Van Duyet is revered all over the South. None of other tombs in the whole area of Saigon – Gia Dinh can compare to the one of Le Van Duyet in size, impressiveness and healing power, and none is so fervently worshipped and taken care of.
Before 1975, the tomb’s triple gate with two palmyra trees on its sides was chosen to be the symbol of Saigon (and of South Vietnam), just as Phuoc Duyen Tower at Thien Mu Pagoda stands for Hue and Mid-Vietnam, and Single Pillar – Dien Huu Pagoda stands for Hanoi and North Vietnam.
Occupying an area of 18,500m2, standing on a knoll right next to Ba Chieu Market, the Lord’s Tomb faces four streets: Dinh Tien Hoang, Phan Dang Luu, Trinh Hoai Duc and Vu Tung. The premises is surrounded by a 500m long, 1.2m high wall with four gates opening to four directions, built in 1948. The Triple Gate was built the next year, opening to Vu Tung Street. Behind this gate are the stele pavilion, the tomb, and the temple, in that order. With brick walls and double-tile roofs, the stele pavilion looks like a shrine. The stele is made of slate with carved Chinese text, eulogizing the merits and legacy of Le Van Duyet. At the end, the text mentions his wife Lady Do Thi Phan and Lord Phan Luong Khe (Phan Thanh Gian) who is also worshipped in the temple.
All these structures are built with Lindera myrrha mix in the bonding material. The reliefs on the two screen walls, though simple, are especially interesting. Mr Tran Van Sung, the chief Tomb Keeper, describes it thusly: the front side of the front screen shows an eagle crouching on a tree, ready to swoop down on a monkey trembling in fear. That was the power of Le Van Duyet over the Siamese. The backside of this screen depicts two tigers, father and son. The father in jumping position, with his front paws on a rock face, is looking back toward the son behind him. The scene shows the affectionate love of Le Van Duyet in his final days for his adopted son.
The relief on the back screen depicts a dragon crouching in a cloud, a symbol for nobility, in simplistic style. The screen has two handles on the sides in the form of ‘leaves turning into dragons’. According to Mr Tran Van Sung, the leaves turning into dragons motive was quite popular and used by in the old times by artists to decorate wooden beams beneath temples’ roofs.
The tomb contains two graves, the general’s and his wife Lady Do Thi Phan’s. Both the graves look like half an egg covering a big rectangle slab, lying in parallel. The graves are protected by a thick rectangle flat wall, which opens at the front to a square with an incense burner.
Behind the graves is the ‘Lord’s Sacred Shrine’ for worshippers to pray to Le Van Duyet and conduct other rituals. The shrine consists of the front, the middle and the main edifices, with East and West corridors on the sides. The edifices, separated by a small open-air space, have curved roofs on top of strong beams connected by simple tenons. Carved wood and stones and ceramic inlay soften the solemnity of the tomb.
Born in 1760 at Tra Lot River Fork (Cai Be, Dinh Tuong, now Tien Giang Province,) he followed Lord Nguyen Anh in victory and defeat, even to Cambodia and Laos. In May 1802, as Lord Nguyen Anh ascended to the throne, Le Van Duyet became a founder of the dynasty.
Later, asked by the King about the successor choice, Le Van Duyet opposed to the King’s idea of deposing the elder line (of Prince Canh, who died at 22) to establish the junior line (Nguyen Phuc Dam, later King Minh Mang.) King Minh Mang resented him for this. Furthermore, he practiced his right not to kowtow the King, granted by King Gia Long, every time he went to King Minh Mang’s audiences. He used his ‘behead first, report later’ right to behead military chief Huynh Cong Ly, father of a beloved concubine of the King, thus driving the King mad.
After he died, King Minh Mang removed the position of military head of Gia Dinh, renamed it Phien An, and appointed Bach Xuan Nguyen as province chief and Nguyen Van Que as province treasurer to govern it together. These two men mistreated the men he trusted, causing Lieutenant Le Van Khoi (Le Van Duyet’s adopted son) to rebel, kill the two men, and seize Phien An fortress in 1835. It took the King’s army two years of siege to take down Phien An. All 1,831 people inside were executed. Minh Mang decreed to level Le Van Duyet’s grave and carve a stone stele saying ‘This is where eunuch Le Van Duyet expiated his crimes.’
In 1841, as he ascended to the throne, King Thieu Tri reinstated wrongly treated meritorious men, including Le Van Duyet. The man’s tomb in Gia Dinh was built bigger, and his shrine renovated.

Besides the tomb of the lord and his wife, there are also graves of their two maids outside of the tomb’s premises. One is on Trinh Hoai Duc Street, and the other on Dinh Tien Hoang Street (inside Ho Chi Minh City’s cadre school.) On Dec 6, 1989, the Ministry of Culture named the tomb a National Relic of Culture and History.