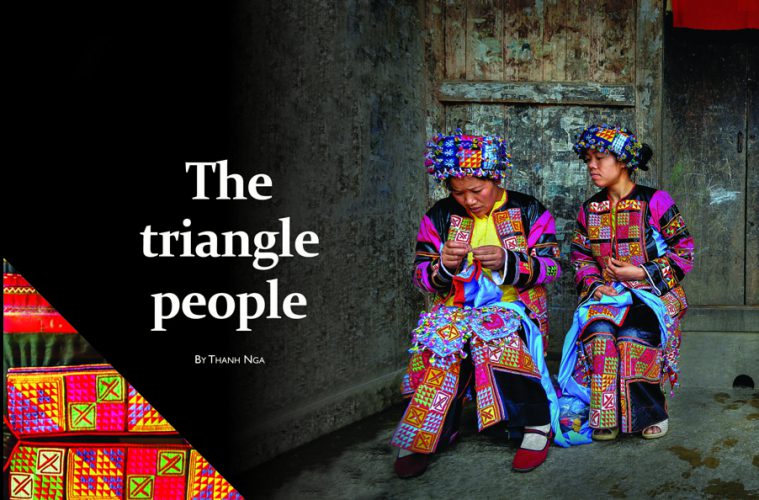 The dress of Lo Lo women in Ha Giang is distinctive and popular. The shirt is long-sleeved and low-cut at the chest. It is just long enough for its fringe to touch the pants, thus creating an impression of fitness and freshness. The front and back are adorned with two coloured triangles, joined to make a square. Each square, in turn, contains 12-20 colourful triangles. Each sleeve is made up of 4 sections, which consist of colourful chunks with parallel lines, mixed between squares like those on the body.
The triangular patterns also appear on the dress of Lo Lo tribes in Bao Lac (Cao Bang) and Muong Khuong (Lao Cai). According to Dr. Lo Giang Pao, deputy director of the Institute of Ethnography (under the Committee of Ethnicities), the triangular patterns originated from the Lo Lo notion of an ancient country in their history. ‘All the patterns on their bronze drums are made of triangles or banyan leaves, which are almost triangular. Ancient Lo Lo people were half farmers, half nomadic. They always carry the notion of their original country, which was of triangular shape.’

Lo Lo elders say that in the old times, the Lo Lo always carried with them seeds of buckwheat, also called triangle wheat. As they wander around the world, they show these seeds to each other to recognize one another. Now that they are settled in Ha Giang or Cao Bang, Lao Cai, their houses are also framed within squares consisting of triangles.
Some ethnographers call the Lo Lo in Cao Bang the Black Lo Lo to make distinction from those in Ha Giang, called Patterned Lo Lo. Black Lo Lo women wear short shirts with square collars and rectangular embroidered patterns around the body and a garish pattern at the back. The sleeves are made of a series of five-coloured chunks. The two front flaps are adorned with colourful, flowery edges. Copper buttons are covered with coloured cloth. The triangles on the back are often embroidered with wave or rice ear patterns
Dr. Mai Thanh Son from the Institute of Social Sciences of Mid-Vietnam (under the Vietnam Academy of Social Sciences) state, ‘The patterns on the dress of the Xin Cai Lo Lo are more graceful than the rather boxy patterns of the Lo Lo from Lung Cam and Lung Cu. The dress of the Lo Lo in Cao Bang is much simpler and darker than that of the other Lo Lo groups, perhaps because this group lives among the Tay people and is influenced by their culture.’
Dr. Lo Giang Pao added, ‘The Lo Lo women from Bao Lac (Cao Bang) wrap their hair, coil it around the head and cover it with a scarf and tie it in a triangle in the forehead. The Meo Vac Lo Lo only wrap, coil and pin their hair neatly. In the past, the headdress showed the women’s marital status.’
The sleeves of the Black Lo Lo also have Ngo Ba, a legendary bird, a pattern that almost never appears on the dress of other Lo Lo groups. According to Mr Lo Giang Pao, this difference comes from their tradition of bird worship. ‘These clans worship this bird because once, when they ran into the forest from hordes of raiders, the bird soared up and diverted the pursuers, thus saving Lo Lo lives. Since then, the clans began worshipping the bird and adopted it as their totem, which they show on the sleeves.’
There are some bird species, such as sparrows, ravens and owls, that the Lo Lo never eat because, according Dr. Pao, ‘It’s a sin. Owls, for example, are like cats. They kill the rats that destroy the crops. The Lo Lo never eat bird eggs, sitting or chick feeding birds, no matter what species. That act is considered immoral and uncultural.’
To have a beautiful, colourful and eye-catching dress, Lo Lo women spend a lot of time and effort growing flax and cotton, weaving, dyeing, and sewing and embroidering patterns. The colours and smallest details on the dress demonstrate their delicate sense of beauty and elegance. The dress by itself is a symbol of a rich spiritual life of a people who live freely on the mountains, between heaven and earth.
According to Mr Lo Giang Pao, these colours and patterns also reflect a highly developed culture, ‘The Lo Lo have their own writing, calendar and art. The more delicate the artistic level is, the more progressive the people. Lo Lo people select colours according to age, occasion such as wedding or funeral. and all that have to be combined with the notion of the cosmos. For example, when dealing with earth genie, they wear green, the colour of farming and fertility. When attending a funeral, they wear more bright, radiant colours.’

*The article in Vietnamese was printed on www.vov4.vov.vn