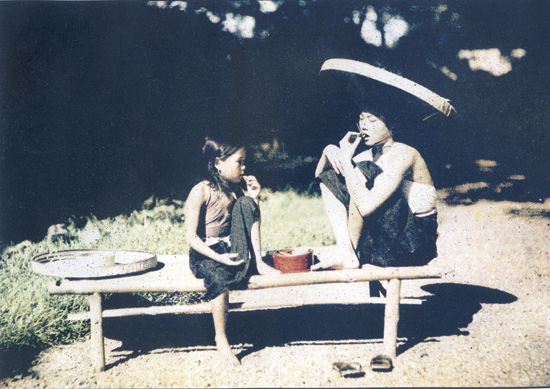 The ‘yếm’, a Vietnamese garment replaced during westernization

Vietnam Heritage, February 2011 — Yêm, a simply-cut piece of usually simple cloth, served as the common upper-body garment for Vietnamese women for thousands of years, until after World War II, when Western dressing style entered and became popular.
I talked to Trinh Quang Vu, costume-designer for many Vietnamese historical dramas and author of Traditional Vietnamese Costume under Different Feudal Dynasties.

1.Can you tell Vietnam Heritage’s readers the history of the yêm ?
The yêm is an ancient Vietnamese bodice to cover the front upper part of a female’s body, used for children or adults. It could be either outerwear or undershirt. Women wore a yêm when having fun, when working in the field, when going out and when running domestic errands.
Older women tended to wear round-necked ­ and younger ones the v-neck style.
It was worn across the classes. Noblewomen wore it. A French artist painted the wife of King Dong Khanh, in the late 19th century. In this painting she was in a yêm. In the tomb of princess Trinh Thi Ngoc Dung (16th century) archeologists found a yêm. Working-class women wore it.
The yêm dates to the Hung Kings (2879 BC – 258 AD). Evidence can be found in the images of women in decoration on a Dong Xa bronze drum, cast over 2,000 years ago.
The yêm was present through Vietnam’s ancient history. Many Vietnamese folktales support this. A post-Hung King legend about the Buddhist ancestor Khau Da La, who lived around the 2nd or 3rd century AD, also mentions the yêm. It also appears in legends about Trung Queens (early 1st century AD).
Colours and materials of the yêm reflected the woman’s age and social status. The working-class women wore dark colours, say, black, beige, or brown, and coarse cloth, while the elite opted for more festive, brighter tones such as red and pink or white, normally in silk or satin.
The yêm made its way down to around 1945 as a traditional costume exclusively of Vietnamese women. (My grandmother still wore the yêm and chewed betel). Along with the decline of the yêm, many traditions disappeared, from the mid-20th century, such as tying the hair around the head, or having the teeth dyed.
Lately the yêm is making a comeback, but only on the catwalk.

2. Why was the yêm  exclusively for Vietnamese women?
Like other costumes, the yêm originated from the environment. In the past there were no antibiotics, no soap or washing powder. Vietnam has hot and humid summers. The tropical climate can cause tropical diseases, especially infections in the private parts. Therefore, the lighter and airier the clothes are the better. And the yêm ­­ was the solution at the time. (I even think it would be a great idea if today women returned to yêm. Bras can cause breast cancer, as you may know.)
In the old days, Vietnamese women wore only a yêm and a skirt, without underwear of any sort.
The way you dress reflects the way you think. Therefore, when the ancient Chinese invaded Vietnam the first thing they did was try to assimilate the costumes.
Clothing must be based on national traditions to survive. The recently-made historical drama Ly Cong Uan – the Journey to Thang Long Capital failed because the costumes were so Chinese-like. It’s a betrayal of the national culture, and the Vietnamese audience does not tolerate that.
We are sandwiched between two giants, India and China, but we managed to maintain our own sets of traditional values. So what’s the point in voluntarily assimilating ourselves with the Chinese like that? There is nothing wrong politically speaking, but when it comes to culture, there’s a huge problem.

A photograph by Ngoc Son, in which Ms Hoai Thuy is preparing rice for a cooking competition in Bac Ninh, northern Vietnam, recently

3. Besides the convenience and historical values, how good is the yêm  from a fashion point of view?
Throughout history, the design of yêm stayed almost the same. Simplicity went hand in hand with Vietnamese traditional dressing style.
When a woman was young she tied the strings loosely to let the neck come lower, especially when she wore necklaces. When she got older she pulled the strings tighter to raise the neck higher. Well, when her breasts sagged she needed to hide them. The yêm is flexible that way.
When let down, the neck of the yêm ­­­shows the top of the breasts. This is the delicacy in Asian culture. An intriguer. If a woman is completely nude in the open air, there is nothing mysterious to run after. The same if she covers herself from head to toe. But half and half and it really piques your curiosity. After all, fashion is to show off the beauty and hide the unattractiveness of the body.
With a yêm, things keep appearing and disappearing again and again. Before you get to see what’s underneath it is covered. It’s so irresistible, provoking. Sexy is how Vietnamese women dress. The traditional long dress, áo dài, is a good example. The . . . white silk pants let you see a little pink patch flesh at the hips. Or the four-patched shirt, its sides cut open to show the colourful belt of the skirt and some of the belly. And in the past wealthy women usually wore silvery or gold chains at the belt, which clanked and caught attention, and aroused people in every sense, the materialistic values of the metals and the physical attraction of the woman’s body.
The Vietnamese dressing style I dare say reached the height of delicacy and sexiness. And the yêm is one example.