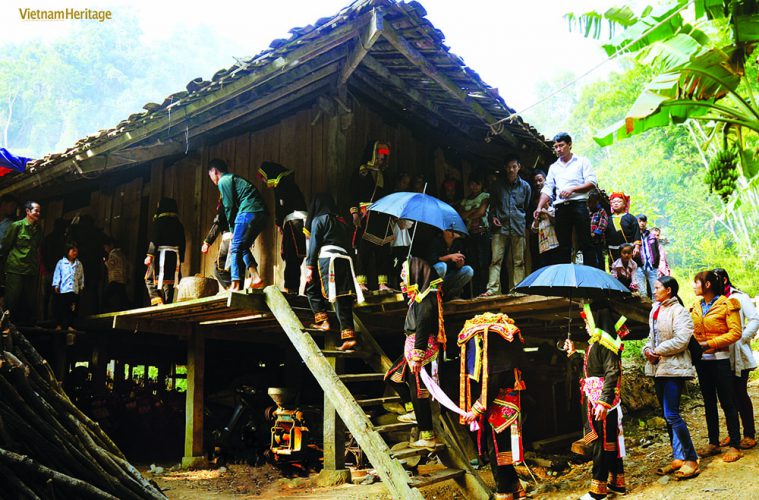 Having a son coming of age, a White Yao family begins
selecting a wife for him among the White Yao young girls in the same hamlet or
one nearby. A sweetheart chosen, they send a word to her family. If that night
is quiet, without owls crying or unusual cocks cooing, it’s a favorable omen meaning
the future will be smooth, and the girl’s family would agree.

On a good day, the
groom’s party brings lavish offerings, including two castrated cocks, a 30kg
pig, 10 liters of rice wine and a certain amount of money etc. to the bride’s to
have a feast together and to fix a favorable date.

On the fixed date, they conduct a
wedding with many traditional ceremonies. The wedding normally lasts three days
and two nights.

This photo set was taken at a White Yao wedding at Lang
Son. Some of the rituals have been modified to suit modern life.

It begins when the bridegroom’s
family sends 11 people in traditional outfits to receive the bride. The delegation
includes a master of ceremony, the bridegroom, and young men versed in repartee
singing.

They bring offerings, including a silver bracelet, betel
and areca, salt, tea, rice buns, two large bundles of cassava vermicelli, rice
wine, eight origami fishes representing the multitude of descendants the young
couple will have, and a pipe containing ash and 24 leaves which guarantees good
fortune and happiness and bars evil spirits

As the group enters the courtyard, the bride, veiled with
a big and thick brocade comes out to meet them. The party is “blocked” by the
bride’s girl-friends, singing folk songs that mean to dare them to come. The
male party has to reply in songs. Then the two parties make movements
pretending to throw water on one another. This means the bridegroom has to
overcome obstacles in order to get to the bride.

After that, the male party is allowed into the house. The
groom alone has to cover his head with a coat and perform the feet cleansing ritual
under a shaman’s guidance, after which he enters an empty room because the
bride is already hidden away as the customs require.

Meanwhile, the representatives of the two parties and the
go-betweens perform rituals at the ancestral altar. Then the parties sing the
suitable repartee songs in front of the guests and villagers.

At a good hour, usually
10 o’clock in the evening, the two parties perform the wedding ceremony in
which the major rite is chasing away evil spirit with torches so it will not disturb
the happiness of the newlyweds.

The next morning, the
bridegroom prays to the ancestors at the altar and offers wine to the
grandparents and parents and the attending guests. Then he goes home alone.

When the groom is
gone, the bride in traditional wedding dress comes out to be greeted by the two
parties, her face hidden behind a hand fan. The Yao believe that leaving a bride’s
face open may lead to bad luck in her future family life.

A man of the
bridegroom’s party puts the coat the groom used the previous day on the bride’s
head. Then the bridegroom’s party sings the
“asking-for-her-hand” song. After that, the shaman, bridesmaids, groomsmen and
kinsfolks follow the bride to her new home. The procession includes an
orchestra of drums, blowpipes and cymbals  that plays emotional and funny songs along the
way. The colorful wedding dress of the bride stands out among the predominantly
green scenery.

According to the customs,
this procession must arrive at the groom’s at about 5 to 6 in the afternoon. On
the courtyard, a yellow coat is put on the bride’s head amidst greetings from
the groom’s clan. The groom comes out, and together with the bride he performs
rites at the ancestral altar. The shaman reads incantations, and the ancestors
grant the young couple their blessings and words of wisdom. The young couple
respectfully lift a glass of wine, take a sip, and kowtow to the elders in the
clan.

The newlyweds are congratulated
and blessed by the clan, villagers and guests, some of whom may come from
faraway. The air is full of happiness and good will. Following the rituals is a
lavish feast, full of laughter, songs and dances.