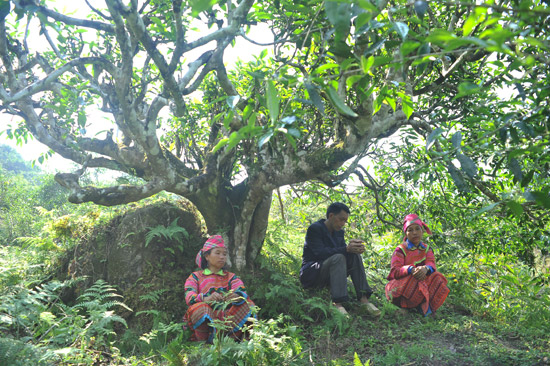 Trees that grow green tea and their own snow

Well-known tea production areas in Vietnam are Má»™c ChÃ¢u, ThÃ¡i NguyÃªn, LÃ¢m Äá»“ng and PhÃº Thá», but when it comes to tea trees of hundreds of years old, the important provinces are on the axis from the northeast to the northwest such as HÃ  Giang, LÃ o Cai, YÃªn BÃ¡i, SÆ¡n La and Äiá»‡n BiÃªn.
My search for old tea trees was motivated by tales about a tree hundreds of years old in the HÃ  Giang highlands that grows wild and has a white down. Monkeys are trained to pick this tea, because the job is dangerous for humans.
The trees are called chÃ¨ (tea) san tuyáº¿t (san â€“ transcription of a Chinese word which means mountain and tuyáº¿t means snow).
I started along the mountain range of West Con Linh in HÃ  Giang Province. This province shares its border with China on its northeast side. I was disappointed to find that some very big plantation tea trees â€“ two or three people can barely join hands around the trunk â€“ had been cut down, milled and sold away to China since 2008. The law does not prohibit the felling of plantation tea trees. There are only trees with trunks 20 cm to 40 cm across left. According to the tea-growers I have met, tea trees 20 cm across are 60 to 80 years old.

Until recent decades, the Dao ethnic groups used to grow tea trees. Above their doors they used to hang bundles of tea for the treatment of stomach upset or ailments caused by the weather or miasmas.
The lowlanders have known about the old san tuyáº¿t tea trees in HÃ  Giang since 1979 when their soldiers went to the frontier to defend the country against an invading Chinese.

Mr Ngo Viet Thanh, a tea dealer in HÃ  Giang, told me that san tuyáº¿t tea trees in HÃ  Giang grew untended on the highlands above 1,000 metres. The san tuyáº¿t tea in HÃ  Giang has a tart taste when drunk for the first time due to a high level of tannin, but then the taste becomes pleasantly sweet. â€˜The ethnic people consider this a gift from the heavens and pick they take it without having to tend itâ€™, he said.
Mr Thanh in 1993 he began to be interested san tuyáº¿t tea. He went to hamlets and villages in the HÃ  Giang highlands to bring it to the lowland markets. I accompanied him to the NhÃ¬u Sang Dao hamlet, in the commune of XÃ­n Cháº£i, Vá»‹ XuyÃªn District, HÃ  Giang Province. It took us more than two hours to go 50 kilometres in a Russian automobile, covering steep, stony and dangerous tracks along the Vietnam-China border, with precipitous slopes above and below.
The old tea trees in NhÃ¬u Sang, close to the Dao houses, have a diameter of 20 cm and more. A dozen kilometres away from NhÃ¬u Sang, where the MÃ´ng Hoa (Flower Hmong) ethnic group live in Lao Cháº£i, there are tea trees with trunks that can only just be circled by the arms join clasping hands. Mr Thanh said â€˜It was hard to transport the tea out because of the tracks full of obstacles. People picked the tea, dried it in the sun, and sold it to Chinese merchants. It is a few kilometres from Lao Cháº£i to China.
I was told that on top of Mount Fansipan, in the HoÃ ng LiÃªn SÆ¡n mountain range, there were tea trees hundreds of years old.
Having got through a number of paperwork formalities that required waiting two days, I had permission to enter HoÃ ng LiÃªn National Park on foot in search of old tea trees. The path I travelled on there was the one travellers take for the peak of Mount Fansipan, the highest mountain in Vietnam.
At an altitude of 2,200 metres, I and my guide came to a fork. On the right a path led to Fansipanâ€™s top. We took to the left, leading to a ravine. The guide warned me that the area where the tea trees grew had a warm climate that favoured several kinds of snakes.
The first tea tree I found was about a metre in diameter and taller than I could estimate. It was hard to recognize it as a tea tree because the whole area was dark green, every root covered with a lush, green moss. Under the canopy was a fern forest. Although I had seen several old tea trees, I had never seen such lofty and big ones. The trunks were close to each other and covered with a white mould. This made the tea trees very different from the other kinds of trees in the area. The guide told me that from the altitude of 2,200 metres up to 2,800 metres, there were old tea trees everywhere and the higher we got the smaller and shorter they would be.
There was no sign that the tea trees here had been exploited, as they had in the other areas. I know of no study or data on this area of old tea trees. I picked a few leaves and brought them back to camp to brew. The tea was light green. It had a strong, fine, sweet taste that lingered.
Through the Vietnam Tea Association, I met Mr Phan Trong Nhat, 34, who had been more than 15 years in the tea business in the city of Äiá»‡n BiÃªn Phá»§, Äiá»‡n BiÃªn Province, in the northwest, and was the only big buyer of tea in the provinceâ€™s Tá»§a ChÃ¹a district.
Mr Nhat agreed to guide me to the tea area in a small truck. The piece of careful advice he gave me was, â€˜You have not been able to figure out how dangerous the track is. I have driven everywhere in the northwest region, and I would refuse to go to Tá»§a ChÃ¹a.â€™ The distance was but 260 kilometres, and it would take a whole day. He advised me to get everything ready: tents, camp beds and hammocks, rice cookers and rice, as there would no services.

The road from Äiá»‡n BiÃªn to Tuáº§n GiÃ¡o was fairly smooth, but before we reached Huoi Long the track was muddy, due to heavy rain the previous night. We passed by the ravines covered with the clouds and terraced rice fields.
We took turns to get off the truck to push. Two tires had to be changed. We reached Tá»§a ChÃ¹a as it got dark, 11 hours after we had set out, both covered with mud and dirt. We spent the night at Táº£ SÃ¬n ThÃ ng, and started for XÃ­n Cháº£i next morning.
The Hâ€™mong in XÃ­n Cháº£i Commune have a forest of the big and beautiful tea trees. Next morning we left the truck behind and got on three Win motorbikes, so-called â€˜motor baggage horsesâ€™ of the jungle.
Mountains appeared and disappeared in mist. The highlands were rough with rocks and the green of young maizes plants. We were moving into a wonderland. Mr Nhat told me that, according to the Department of Agriculture in the District of Tá»§a ChÃ¹a, the trees grew in four communes, Táº£ PhÃ¬nh, SÃ­nh PhÃ¬nh, Táº£ SÃ¬n ThÃ ng and XÃ­n Cháº£i. The communes with the most tea trees were Táº£ SÃ¬n ThÃ ng and XÃ­n Cháº£i, which between them had about 7,000, 4,000 exploited.
We were stopped by a big bamboo branch. Mr Nhat said, â€˜The track ends here.â€™ Looking around, we realised we were in a forest of old tea trees in clouds. We were in a mountain hamlet called Háº¥u Chua. Two people stretching their arms around the trunks could hardly reach each other. The trees were about ten metres high, with fat buds and strong, thick, glaringly green leaves.
Mr Nhat said these trees were the most productive in Tá»§a ChÃ¹a, as they grew at a high altitude, with mountain clouds covering them all day. They were vigorous and did not need care.
In the grove belonging to Hang A Chu, in Háº¥u Chua mountain village, there is the biggest tea tree in Tá»§a ChÃ¹a. Three people stretching their arms around its trunk can barely touch hands. A Chuâ€™s grand-father had said trees in the garden had been there eight human generations.â€™
In Háº¥u Chua village, almost every house has at least two or three tea trees growing close to the verandha. Hang A Chu said, â€˜There were so many tea trees in our Hau Chua area. In 1982, when I came back from military duty, I found the people in the hamlet had cut down two-thirds of the tea trees so that they could have more land to grow potatoes and cassava.â€™ A Chu had to stop them, telling them that if they ran out of rice, they would still have tea trees to live on and that he would like to buy their trees if they wanted to sell them.
We kept on to Mang Chieng village, also in XÃ­n Cháº£i, hoping to get into the tea-tree grove of Thao A Cua to see a tea tree that had been selected as the most beautiful in the area, with a big trunk, nice branches and well-proportioned, like a perfect bonsai. Thao A Cua said, â€˜Nobody knows who grew this tea tree; when I grew up I saw it there, then we just went ahead and picked its leaves; nobody has to take care of it.â€™ Thao A Cua said he picked three or four times a year, each time basketting as much as 20 kilograms. The house of Thao A Cua is classified the biggest in the hamlet. Thao A Cua said, â€˜It is thanks to these tea trees that I own this personal estate.â€™
Mr Nhat told us that he had asked several people in the area to install a dryer in the hamlet, given them technical guidance and pushed them to pick and dry leaves he would come every week or every month to buy and then take back to sell to tourists in Äiá»‡n BiÃªn.
Mr Nhat said he was the only tea dealer in this area.

Text and photos by Lam Phong