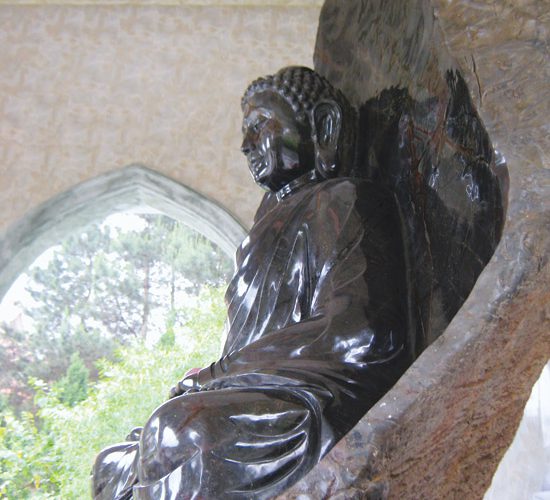 Vietnam gets a jewelled Buddha of its own

Visitors travelling to Tay Thien Zen Monastery in Tam Dao, 80 km to the west of Hanoi, can pay homage to the precious statue of Buddha Shakyamuni, which is made of sapphire. The statue was unveiled in 2012.
The statue is housed in a majestic stupa, which was built on an area of 200 square metres. The entire sculpture (including the pedestal) is 3.45 metres in height, weighs 31 tonnes and depicts the Buddha Shakyamuni in a lotus posture, leaning against a stone cliff carved in the shape of a bodhi leaf. The face bears the calm and lenient features of the Vietnamese people. The whole statue glitters with a black shiny gloss and its surface is so smooth that you cannot find any blemish on it. According to Thich Hue Tinh, a Bhikkhu monk at Tay Thien Zen Monastery, the stone was brown, but after being carved and polished, the blacker and shinier it became. The pedestal is still rough and monolithic.
The idea of carving a statue of Buddha from gemstone had been nurtured among Buddhist monks and nuns since 2009, when the people worshiped ‘the Jade Buddha for Universal Peace Statue’. 27 metres high and weighing four tonnes, it is said to be the largest Budhha statue carved from gemstone-quality jade in the world and was exhibited in many countries, including Vietnam. The members of Hanoi Gem Association questioned: ‘Vietnam also has many kinds of gems and the artisans are not inferior, why don’t we have a jewelled statue as do the Australians?’ The Hanoi Gem Association discussed the matter with the managing monk of Truc Lam Tay Thien Zen Monastery, Bhikkhu Thich Kien Nguyet, about the idea of searching for Vietnamese gems to create a jade statue of Buddha. After two years, a group representing Vietnamese Bonsai Rocks and gem experts went to Chau Thanh Commune, Quy Hop District, Nghe An Province, Central Vietnam, to appraise six blocks of particularly rare rock found there. In the stream bed, the water-flow gushed around slabs and stones, wearing most of them into rounded shapes. Strangely, the six rocks did not show any signs of erosion and still retained all of their sharp edges. The total weight of the six blocks was estimated at about 200 tonnes. According to artisan Ngoc Chau, Vice Chairman of Hanoi Gemstone Association, geologist had tested and concluded that the rocks contain 80-90 per cent sapphire with a hardness up to nine (a diamond’s hardness is a 10, among the hardest substances).
Knowing that some strangers were taking the precious rocks away from the streams, the local people gathered together to take them back. Artisan Ngoc Chau said: ‘A number of locals blocked our road by using obstacles such as farm tractors and wagon trucks, although we had negotiated with the authorities and were allowed to carry them away. A girl also prevented us from doing our work by lying across the road. When we explained that we were to use the stones to carve statues of Buddha and place them at Tay Thien for the people of the whole country to worship, the girl and the villagers accepted and allowed us to go on. ‘It took a month for 80 tons of the gemstones to be brought to Tay Thien Zen Monastery,’ Honoured Monk Hue Tinh said, ‘Two large blocks of rocks had been used to make the statue and its pedestal. The other two blocks will be used to sculpt the statues for the Buddha King Tran Nhan Tong and Maitreya Bodhisattva later.’
The construction of the statue was tremendously elaborate. Many groups of artisans were invited to manipulate it, but they gave up, because the rocks were too solid and hard to carve. Many punching, cutting, grinding tools and machines were chipped and damaged, but the rocks were still impervious. No knives could carve or abrade them, because sapphire is used to cut other materials. Not until the artisans Pham Ngoc Chau, Hoang Nam Hai, Vuong Ngoc Tien replaced the awls and saws of the grinder and cutter with diamond blades did the work go on smoothly.
After nearly two years of honing, the sapphire statue of Buddha was completed.

Text and photo by Chu Khoi