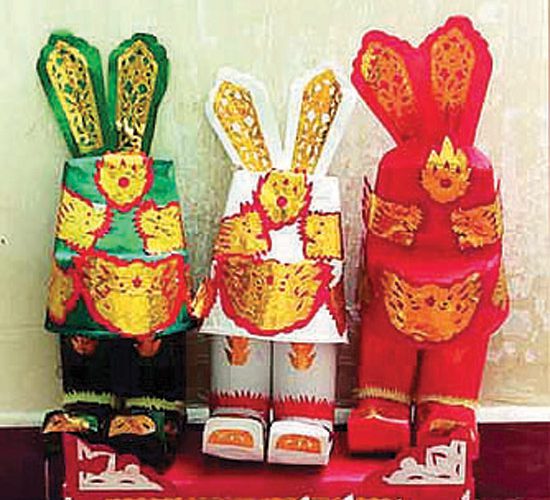 Kitchen gods do not need trousers
Until several decades ago, Vietnamese still used three clay pieces for cooking. Seven days before the lunar New Year, when the kitchen gods go to heaven to report to the Jade Emperor the good and bad deeds carried out by the family in the year, a ritual is held to see the kitchen gods off (three gods, one female and two male). New clay pieces are brought home, while the old ones are discarded at the foot of the village’s banyan tree or near a shrine to become objects of worship, just as lime pots (chewing betel with lime is a long-standing tradition for Vietnamese) that can no longer be used.
Also, a must for the kitchen god ritual is a new set of votive clothes (three sets for three gods). However each set contains only a shirt, a hat and a pair of shoes but no trousers. It is not known why there are no trousers.

Is it worth it?
$5,000 is the price one is expected to pay under the table to secure a job at a government office at district levels in Hanoi, Lao Dong of 10 December, 2012 quotes an official at the Hanoi Communist Party branch as saying. The minimum salary for a government worker is about $50 a month.

Lucky number 12
The number of applications for an identity card or ID changes increased three to four times on 12/12/2012. Thanh Nien of 13 December, 2012 cites police in Mekong Delta provinces as saying it is both a special day and easy to remember.

In Vietnamese, kh? qua means ‘suffering over’, so the dish sounds like it represents a real wish.
Fruit is a popular offering on the Vietnamese altar. For Lunar New Year, southerners like to choose a set of soursops, coconut, papaya and mango, since in Vietnamese, these words, (c?u, d?a, ??, xoài) sound like praying for enough money for spending. Custard apple, or mãng c?u, is also used instead of soursop, or mãng c?u xiêm, for their linguistic similarities.

Vietnamese rock the frock
While few would argue that áo dài, or the long dress, is the formal attire for Vietnamese women, the debate over an ‘official’ national outfit for Vietnamese has been dragging on for the past 12 years, according to Thanh Nien of 22 December.
Prof Hoang Chuong, as quoted by the newspaper, said during a recent seminar on the garment that Deputy Prime Minister Nguyen Thien Nhan said both he and the Minister of Culture, Sports and Tourism Hoang Tuan Anh were very embarrassed at a recent event to celebrate the Vietnam–South Korea relationship because the South Korean Minister of Culture, Sports and Tourism wore a traditional dress while both the Vietnamese officials dressed like a Westerner.