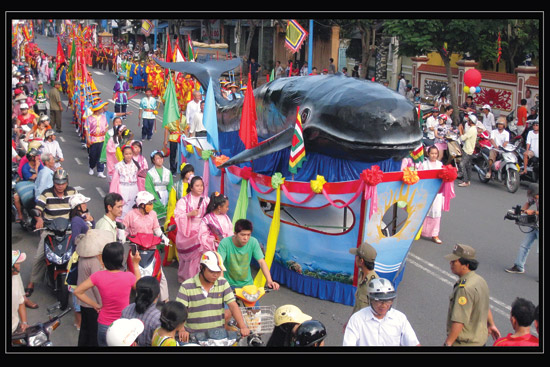 One day, Avalokiteshvara Bodhisattva the Compassionate was flying on a lotus over the ocean and saw countless good fishermen in danger in a storm. Bodhisattva took off her frock, tore it into pieces, and then borrowed elephant bones and threw them into the sea. Immediately, each piece turned into a whale that rescued the fishermen. Since then, because of the belief that whales are the incarnation of the Avalokiteshvara Bodhisattva, the folks living near the sea organize a funeral and burial ceremony for every dead whale that washes ashore, and build a temple to worship them.

This is a typical legend among those that explain the origin of the whale worshiping custom of the coast fishermen from Quang Binh Province, Central Vietnam, to the south of the country. The practice of worshiping whales was recorded in ancient documents such as Gia ??nh Thành Thông Chí (An important book of historical records about the southern region under Nguyen dynasty) by Trinh Hoai Duc (1765-1825); ??i Nam Nh?t Th?ng Chí (Records of the Unification under the Great South, a national geography and history book transcribed by Qu?c S? Quán (National History Council) in 1865 under the Nguyen Dynasty. More than 200 years ago, the Nguyen kings deified whales with the title ‘The Great Generals of the Southern Sea’. In addition, fishermen called whales by many formal titles, such as: ong (Mr), ong khoi (Mr offshore sea), and ong long (Mr near-shore sea).
In many fishing villages along the coast of central and southern region are temples worshiping Ong fish (whales) and the graveyards of whales.
‘Ba Ria-Vung Tau is the locale with the highest quantity and density of whale temples in the South. Along more than 50km of its coast are 10 temples venerating whales. At the most famous and oldest fishing villages in Ba Ria-Vung Tau such as Phuoc Hai, Phuoc Tinh, Thang Tam, fishermen not only built shrines for whales but also established cemeteries to bury them, as at the cemetery at Phuoc Hai village with up to 20 graves,’ according to the documents of the Museum of Ba Ria-Vung Tau province.
The documentation posted on the province’s website said: ‘Because whales are believed to be sacred, whenever the villagers discover any dead whales washed ashore, they consider the incident as good luck. The first person who discovers the dead whale (or the eldest son of that person if the discoverer is a woman) will mobilize the whole village to organize a funeral that is as solemn as, or even more solemn than, the funeral of his parents. People use alcohol to wash the fish thoroughly, and then take red shrouding to wrap around its body seven times and carry out many rituals before and after the burial. During the mourning period, the ‘firstborn’ male organizer has to keep himself clean and righteous, or he will be ‘perturbed’ so greatly that he has to scream and dance all day until he prostrates himself on the grave of He (the whale) if he wants to recover. After three years, that ‘firstborn’ male organizer mobilizes the villagers to dig the whalebones up, use alcohol to rinse them, and then expose them to the sunlight until they are thoroughly dry and bring them into a shrine inside the temple that is built in advance. Every year, on the death anniversary of the whale, the villagers gather to contribute money or offerings and organize an extravagant procession festival.’
Cultural researchers believe that the Ong fish procession festival is the most important event to coastal people.
‘Among the temples worshiping Ong Nam Hai (Mr Southern Sea) in Ba Ria-Vung Tau Province, the one at 77A Hoang Hoa Tham street, Thang Tam Ward, Vung Tau city, is typical of the architecture as well as worshipping customs,’ said Mr Truong Van Khoi, the head of the management board of Dinh Than Thang Tam relic complex.
After visiting Lang Ong (His Mausoleum or Mr’s Mausoleum), one of the three works inside Dinh Than Thang Tam relic complex, I noticed that it has an area of approximately 100 square metres and a plain exterior. But stepping inside, I saw many details which are painstakingly rendered with devotional images such as dragons carved around the four cement pillars from top to base and dozens of paintings painted on the walls and ceiling; carps transforming into dragons, horses with dragon tails and a whale playing with a dragon, and five brick-built altars painted in red, blue, yellow. On every altar is worship paraphernalia that is carved elaborately with different patterns and blackened by years of devotional smoke. Right behind the main altar, in the middle of the temple, are three glass cabinets, which have many huge bones inside.
According to the documents of Lang Ong’s management board, the temple was built in 1824, is approximately 18 metres in length and is used to worship a whale, which died more than 100 years ago. Kings Thieu Tri and Tu Duc nominated the temple with three dynastic investiture decrees in 1845, 1846 and 1850.
An old man who looked after the temple said: ‘Many boat owners in Vung Tau believe that if they worship ‘Mr’ with dignity and respect, ‘He’ will protect their voyage by making the sea calm, fish available and rescuing their boats when they are in danger at the sea. The worshipping rituals or praying and offerings are held regularly at the temple.

The days when these practices are carried out most and fullest is Nghinh Ong (Whale Procession) festival held annually from 16 to 18 or the eighth month on lunar calendar (20 to 22 September this year). This festival is one of 15 typically traditional festivals of the nation, which features the most distinctive characteristics of coastal folk with the ‘picking Him (whale) up’ ceremony.

According to the documents recorded by the management board of Lang Ong relic, after the opening festival drums echoing at dawn, a fleet of boats (sometimes hundreds) decorated with flags and flowers, departs for the sea. At the head is a large ship, which is specially decorated; on its deck is the altar of the whale and the traditional orchestra. The fleet gathers at a specified location. The host orders drumming and offers incense and wine and prays for national security, civil peace, good weather and many marine fish. After ‘knowing’ that He agrees to be picked up, the ceremonial host orders the fleet to return to the shore and organize an offering ceremony for the spirits of those who died at sea.
‘During three days of the festival, many fishermen, local residents and pilgrims come to the temple to make offerings from 7 am to 9 pm; there is a performance of traditional orchestra in the evening,’ a member of Lang Ong’s management board said.

On the premises of the temple, which is approximately 3,000 square metres, there are also two other works, which are Dinh Than (Deity Shrine) and Ngu Hanh (five elements of the universe) shrine (also known as Mieu Ba – the Shrine of the Lady). The complex of these three structures are referred to as Dinh Than Thang Tam (The Temple of Thang Tam Deity), which is still keeping its ancient features of old buildings for worship in the far past, though it has undergone a number of restorations. It is also the most popular destination in Vung Tau city.

The Deity Shrine, built in 1840 to worship the gods of the river, the sea, the god of agriculture, and the village tutelary spirit. Most notable is the architecture of the main worshipping hall, where in the middle of its tile roofs is a statue of ‘a couple of dragons encircling the moon’ and most of the rafters, truss, wood columns are carved elaborately.
The Shrine of the Lady, built in 1832, to worships ngu hanh, the five materials needed to form the world: metal, wood, water, fire, earth and two national household goddesses who are Thien Y-A-Na (also known as Lady Po Nagar, a Cham deity) and Thuy Long Than Nu (the Female Water Dragon Divine).
In 1991, the relic complex of Thang Tam Deity Temple was designated as a national historical and cultural relic.