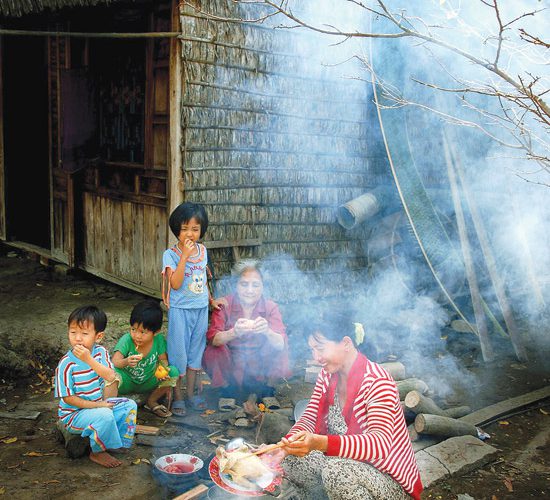 Firelight of New Year’s Eve.’ When thinking of or uttering these words, my mind immediately falls back into those New Year’s Eve nights of my childhood.
The little mementos,
cherished and persistent, suddenly spring up, bursting and zig-zagging merrily like the tiny little firecrackers that exploded each time we celebrated the holiday.
I remember how busy my dad was with arranging offerings on the ancestral altar. There was always a lot of fire in my house on New Year’s Eve. My mom’s fire that cooked the rice cakes, my dad’s fire that burned paper votive objects, my grandma’s fire to burn incense, and my firecracker fire … not to mention the fire in everyone’s heart. It was so warm, so bright, and so full of love. Later, grown up, I knew, as Rabelais said, that ‘Fire is the great master of art.’ Fire is, indeed, the great master of all arts, but the New Year’s Eve fire was the greatest. There were always two amazing extremes; before midnight, everybody fussed heatedly, but after midnight was the time of a tranquil void that was filled with hopes and expectations. The two were connected by a nick of time: the midnight moment. And I, so young that I only knew half the alphabet by heart, nevertheless knew it was time to put on new clothes, grab a roll of firecrackers, and wait for Mr Midnight. My mom’s rice cakes cooked, she sat down with Grandma, who was making quids of betel.
‘Mom, Mr Midnight wears a coat and a pair of shoes but he forgets his pants, right?’
While arranging fruits and sweets on the ancestral altar, my dad thundered:
‘Stop talking rubbish, you stupid little cub.’
My grandma immediately scolded him:
‘It’s you who talk rubbish. He is little and confused. My child, it’s the Kitchen God who doesn’t wear pants. That’s his way. He would look ridiculous in pants. But Mr. Midnight is a dandy. You have to burn firecrackers to welcome him. Those whom he favours will be very smart, very rich.’

So I rushed out to the courtyard, stumbled on the porch, and fell face down. My face was bruised, but being brave, I shed no tear. My mom hurriedly pulled me up.
‘His nose is bleeding. Come, quickly.’
My dad ran out, looked at me briefly, and then looked at his watch more attentively then at my blood. He shouted, ‘Very good. Very timely. It’s not midnight yet. No problem. He fell in the old year. He bled in the old year. Wipe his nose, quickly. I am busy.’
Then he went back inside and continued with the lights and incense on the altar. I looked in from the courtyard, the incense smoke curling up in the bright light. The doors of neighbouring houses were also wide open, shedding lots of light. Perhaps their kids were also outside, waiting for the moment to burn the firecrackers. The clock on the table rang. At that sound, I hurriedly tapped the burning end of an incense stick to the fuse. A torrent of low blasts, fire and smoke elevated the mood to a euphoric height.
What merriness! The firecrackers sounded crisply like the laughter of Mr Midnight. I fancied him flying into the house, patting my praying dad on the shoulder to greet him. Then He pulled my grandma’s ear to wish her longevity. Then He passed by me and dropped His long-lasting laughter in my hands. My feet caught the rhythms of an imaginary melody that played in my ears. Mr Midnight had just kindled a fire in my heart. And then He was in another house.
The firecracker blasts – Mr Midnight’s laughter – ended, I went inside. Everybody’s face seemed younger, relaxed, softer and kinder. I vaguely understood that this was due to Mr Midnight, too.
Grandma told me:
‘Go to bed, my child. Sleep well so tomorrow you can have a lot more fun.’ Then she turned to my dad and said, ‘Leave the lights till morning. Don’t turn anything off.’
Following Grandma’s instructions, I went to bed, but couldn’t sleep. There was just one New Year’s Eve in a long year; sleeping would be a waste. But there was no one to play with now. I was all to myself. So I just lay there, knowing that it did not matter if I slept or not, but still reminding myself to make sure to be fresh the next day, a day filled with hope. A day called Tet.