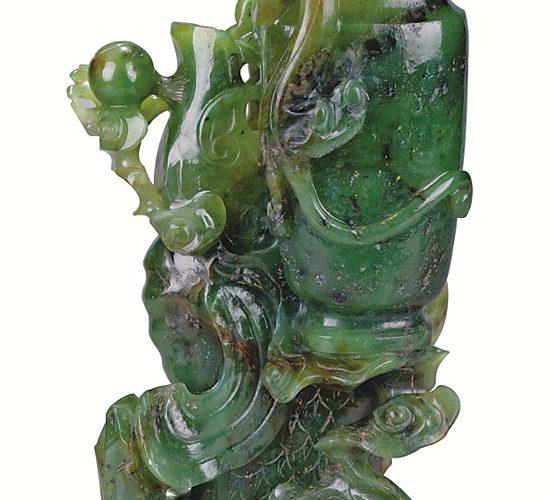 What s in a vase or two

Vietnam Heritage has been publishing a series based on Vietnamese Ancient Jade, published in Hanoi, 2011, by the Vietnam National Museum of History.
This month the topic is pots and vases used by the Nguyen Dynasty.
Some white jade pots were decorated with a bird holding a peach branch. A grey-white jade vase shows two elephant heads and a bat, the recurring S character, flower leaves and the characters for longevity and gladness. A white jade vase features a yuhuchun shape, elephant handles, and peony flower leaves on the faces.
A flat grey-white jade vase has an oval mouth and feet and two elephant-head handles, two white and green jade bottles with Imperial ink slabs featuring round mouths, slender necks, and bell-shaped body were decorated with two tiger faces.
There were arnica jade suspended pots with covers and bodies carved with dragon and geometry motifs. A collection of arnica jade and gold objects included a mortar and pestle for pounding betel and a pot with a square mouth, wooden feet and recurring T character, lotus leaf and cloud motifs. The seal on the handle also was made with arnica jade. This group was dated to the 19th-20th century.
Pink jade and grey-green jade were materials for ancient Royal objects such as a vase with a cover decorated with birds holding leaves.
A spinach-green jade jar had fish and dragon shapes covering its body. A spinach green jade brush-pot with bamboo feet depicted a standing phoenix. A black and white jade brush-pot displayed black and white apricot blossom branch motifs.
A large yellow-grey jade cup decorated with a tiger face and a dragon-shaped handle was a copy of ancient bronze objects.
A white jade vase/spittoon inlaid with gold and decorated with a golden circle and sapphire was precious and rare jade, with a style of decoration similar to motifs on the Crown of Kings, demonstrating that it was a Hue Imperial Royal object of the Nguyen Dynasty.