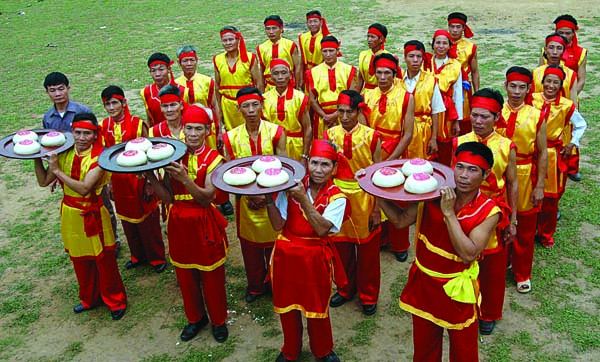 Where glutions buns are offered to Hung Kings

Since the beginning of time, glutinous cakes and buns have always held a special place in Vietnamese hearts. Representing the ‘round sky and square earth’ that gave birth to the universe in between, they are a part of our Vietnamese faith and reverence of the Hung Kings and ancestors. On the 10th of the 3rd lunar month every year, in Mo Chu Ha Village, Bach Hac Commune, Viet Tri Township of Phu Tho Province, pestles and mortars get busy making glutinous buns for the celebration of Hung, the nation’s ancestor.

A contest of wrapping and cooking sticky rice buns to celebrate ‘Death Anniversary of the Hung Kings; the 10th of the third lunar month, Phu Tho Province.
Photos: Ngo Du

The story of glutinous cakes and buns
Once upon a time, during the reign of King Hung the 6th (about 2,700 BC), having defeated the An aggressors, the King wanted to pass the throne on to a heir.
As the New Year approached, the King told his sons, ‘The one among you who makes the best and most meaningful food items to offer on the ancestral altar will be my heir.’
The princes immediately dispersed to all corners of the country, looking for the rarest and most precious things to offer to their father. Only the 18th prince named Lang Lieu stayed home, spending time in deep thoughts.
On the cold bright night of the last full moon of the year, coming to the fork of the Bach Hac River where the soil was rich with sediments and folk worked hard all year round in happy harmony, Lang Lieu suddenly sensed a familiar aroma from a nearby paddy. It was the sweet smell of a crop of October sticky rice. It was an awakening that led him to what he was looking for.
The day finally came for the princes to pay tokens of gratitude to their father. As the sun approached the western horizon, the King still had not found the adequate offering that his heart desired.
Then entered Lang Lieu with his tray, humbly approaching and kow-towing and wishing longevity for the King. Then he modestly removed the red cloth covering his tray. The whole court was in awe at what they saw. On the tray there were only a square green cake and a white round bun.
But the King was thrilled: ‘None of us has ever seen any of these. This purely white round bun must represent the Sky, and the green square cake the Earth. Your offering encompasses Yin and Yang, Father and Mother, Heaven and Earth!’
‘The pure white color of the heaven means beautiful sky and favourable weather. The earth is green with rice paddies and green pea fields, and juicy with the meat inside. Those are all the riches that human hands produce.’
The King came over to Lang Lieu, put a hand on his head and proclaimed him the successor to the throne. The court hailed the father King’s longevity and the young King’s long years of wise reign. The 18th prince ascended to the throne as King Hung Huy Vuong or King Hung the 7th.

The King’s bun rice pounding rite
Like many others, the Mo Chu Ha Village Festival educates young generations about the ground breakers, the pioneers who taught people to cultivate rice and cherish the resources granted by heaven and earth.
Mr Nguyen Duc Manh, head of relic site management of Mo Chu Ha Village told me, ‘Until now, our villagers have preserved our ancestral way of pounding sticky rice with stone mortar and bamboo pestles. That’s the best way to make the best sticky rice bun, and not every place can do it.’
As Mo Chu Ha villagers showed us, the preparations for bun making to offer to Hung Kings are really painstaking. First, the sticky rice is screened for identical large round shiny grains. Secondly, the pestles should be made of male bamboo which is old enough to be tough so the fibers at the end don’t burst, but not so old as to lose elasticity. Thirdly and most importantly they must make a healthy oil to lubricate the mortar and pestles so the buns don’t get stuck to them.
Customs dictate that the young men of the bun-pounding teams enter the scene under the rhythmic commands of the host. Under each command, they must hold out their pestle at the shoulder level and bow. They must bow four times: first to heaven, then to the earth, then to the host deity of the festival, and lastly to the festival-goers.
After that, at drum beats, steamed rice is poured into the mortars. The crowd begins cheering as the pestles move up and down rhythmically over the milky white flesh of rice. The heat intensifies.
Each team consists of five men. One has to hold down his pestle like a center shaft. The other four pound the rice around. A technically versed and well-coordinated team can finish a five to seven kg batch of rice in ten minutes.
‘Women are not allowed to hold the pestles and pound the rice, because these are buns to offer to Hung Kings. Even the men must be selected among the most robust ones to be strong enough to pound the sticky rice for ten minutes,’ Mr Hanh explained.
High skills and well-coordinated efforts perform wonders. Before long, mounds of sticky masses are transformed into cute little round white buns nested in a patch of banana leaf and displayed on a plate.
‘A good bun must have translucent white color, fresh and precious like a gem. It has to be round, flat in the middle and well formed on the edges,’ Mr Hanh added.
After millennia of history the people of Mo Chu Ha have managed to preserve their buns’ form, taste and flavour to offer to Hung Kings on the nation’s big occasions.