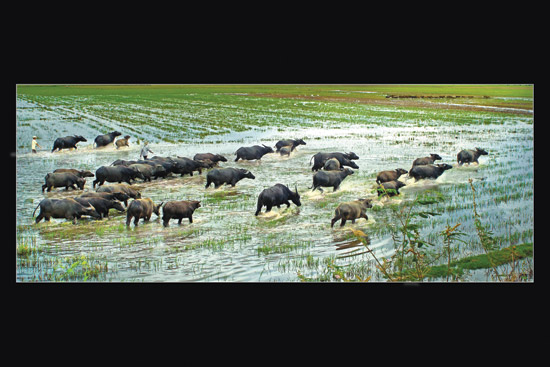 Where the buffalo roam

Flood season in Tan Hong Dist., Dong Thap Province, in the Mekong Delta. Photo from Vietnam Heritage Photo Awards 2013.
Photo: Nguyen Ba Lam
When I inquired of many old peasants and cultural scholars of the Southwest regarding the season for letting the water buffalo roam in ‘Huong Rung Ca Mau’, many shook their heads and said that it no longer happens because mechanization has penetrated all the way to the most remote fields. Some longingly recalled images of the native homeland that they thought had been lost. Yet, I still believed that those wondrous images had yet to vanish. For the peasants of the Southwest, the relationship between man and buffalo is one that resonates with parity and mutual empathy as in the familiar folk ditty ‘Oh water buffalo, we say to you…’ Work in the fields is strenuous, ‘giving up one’s face to the earth and back to the sky.’ Yet from this premise bears forth the vital, untrammelled spirit of the peasants in this region throughout their reclamation of the most fecund wild lands, among which the buffalo walk in virtual unison with the peasants and share with them all endeavours. Throughout the year, ploughing and harrowing bring in bowls of rice and articles of clothing for so many people. The merit of the water buffalos is repaid by letting them loose to roam for the four months during which the floods inundate the fields. The water buffalo, having nothing to eat, are emaciated and look pitiful. People flee the flooded harvest fields in search of sources of food for the buffalos and, at the same time, allow the buffalos to rest and regain their strength as they wait for the water to recede. The late writer Son Nam, who authored the notes ‘The Season for Letting the Water Buffalo Roam’ (‘Mua len trau’) in the Native Forested Lands of Ca Mau while he was still with us in the world, fretfully recalled the time when he was a consultant for the film crew of The Season for Letting the Water Buffalo Roam (2003), directed by Nguyen Vo Nghiem Minh. In order to create an authentic atmosphere for the film, Director Nguyen Vo Nghiem Minh travelled throughout the lowlands, but a scene of free-range buffalo was nowhere to be found. Thus, he had to rent many herds of buffalo and gather them together for the film.

A young herdsman following buffalo herds over the regions. Photo: Binh Nguyen
On my expedition this year to make a documentary film about the flood season, I resolved to find the authentic roaming buffalo. I looked for the road up to the Thuong Phuoc border crossing, for many people had related that ‘luckily, over in Cambodia people still let the buffalo roam.’Once at sunset, a farmer at Ut Goc Bridge suddenly remembered, ‘Deep in the fields of Thuong Thoi Tien, a communce of Dong Thap Province, I hear that the buffalo flock in great numbers. This year, there’s been a great deal of flooding, after all.’ Thus, I plodded there through the mud. My heart seemed to stop as a herd of easily up to a hundred buffalo appeared before my eyes, wandering in droves amongst the frontier fields. These herds of buffalo were led there from the Thuong Phuong border crossing just the day before. Mr Nam Di, an old farmer well-known in the region’s trade, smirked when he learned that I had been searching for the buffalo for almost the entire previous week, ‘How could they ever be lost, kid? Just go deep into the forest and you’ll run right into them. This affair could go on for another hundred years without ever disappearing. It’s just that it’s gone down, because people nowadays prefer to use machinery. This year the floods came on quickly, so the buffalo got stuck in many places and not all of them have been able to come and flock together. If they had come in full droves, then this herd would consist of several hundred buffalos.’The trade of letting the buffalo free to roam is peculiar in that, once you are involved with it, you are attached for life, and then so on from one generation to the next—just as Mr Nam Di and Bay Duc have let the buffalo wander the marshlands of Hong Ngu, Tan Chau, and Tan Hong, etc. for over fifty years. The herdsmen of the fields there, at just 10-12 years of age, are already well-seasoned from having followed the buffalo herds all over the region. It’s sort of a pity in that, for their love of the buffalo and passion for a trade passed on from father to son, they all suffer from a lack of education.The youngster Tinh, who is twelve years old and the head of a herd of five water buffalo, ingenuously said to me, ‘I could study forever but to no avail, uncle. My teacher says that I’m as doltish as a buffalo. He’s surely right, since I only like to go wandering with the buffalo.’As for Mr Ba Thien, who for almost twenty years has followed along with the unbridled buffalo, he spoke jovially, ‘Our love for our wives pales before our love of the buffalo. When the buffalo sleep, we must stoke thatch to give off smoke and cast mosquito nets for the buffalo to lay and rest so as to avoid the mosquitoes. The buffalo mosquitos in these parts are as big as flies and they suck the buffalos’ blood all night, afflicting them with sickliness. Cuddle my wife at home for two days and I’m already bored, but after wandering off for three to four months on end, I still don’t want to go back home.’

Flood season in Tan Hong Dist., Dong Thap Province; Flood season in Tri Ton Dist., An Giang Province.
Photos:Nguyen Ba Lam;
An buffalo heard fleeing the flooded harvest fields for finding the food from Thuong Phuoc border, Dong Thap Province; A young herdsman following buffalo herds.
Photos: Binh Nguyen
That evening Nam Di and Bay Duc’s group of roaming buffalo herdsmen enjoyed something of a small pleasure: They were hired to haul paddy. Compensation for each of their labours was just a little over VND100,000. That the pay was a little less than the price of renting a harvester to pound together didn’t matter. There were fields on which to come and go, fish, and bottles of spirits as well as the happiness of being with friends once the buffalo herd was well-fed on straw and warm from paddy. I noticed a woman all alone away from a group of male roaming buffalo herders who were tippling by an embankment. She was the solitary female among this band of roaming buffalo herdsmen. Her name was Nguyen Thi Em. The group often teased her as ‘Littlest Sister’ or ‘Em the Littlest’ (her name means sister), despite her being the most senior person in the band of roaming buffalo herdsmen. Ms ‘Littlest Em’ has gone to care for the water buffalo since she was just five years old. Today, she is sixty. She said that her profession was passed down from her paternal grandfather to her father and then from her father to her, since her family lacked sons.Having bound her life to the water buffalo for over half a century, Ms Em understands the character and habits of each buffalo as if it were her own son, despite never having been an actual mother. She knows how the buffalo that takes off is fond of sleeping with mosquito nets and the way the discomfited horned one clashes horns with other males in struggles for females. Ms Em is masterfully versed in all their whims and quirks. When other herders who let water buffalo roam free fall ill, they have to entrust their buffalos to someone else who goes and lets them wander, but Ms Em has never for even a single day entrusted her water buffalos to anyone else. Ms Em said, ‘My father said that caring for the water buffalo is a profession and that, if I didn’t love the buffalo, then I shouldn’t take up the trade. Thus, I never hand over my buffalo to anyone else so that they may go and roam free. Even to faraway fields we go, attending to the buffalo with our own hands. Whenever I sell a water buffalo, I weep all day as if I had sold my own child.’ She was leading along a herd of four water buffalos with a band of roaming buffalo herdsmen to a certain field, their third of the flood season. At night, she slept on the earthen mounds and in the dirt as do hardy herdsman because, for her, the water buffalo meant everything, her assets and her family. Not only Ms Em, but also nearly all the roaming water buffalo herders name the buffalos the way people out on the streets name their dogs and cats. They come up with names from whatever seems interesting to them like ‘Flyer,’ ‘Vehicle,’ and ‘Lightweight’; or based on however they see the buffalos’ appearance like ‘Portly,’ ‘Fatty,’ ‘Fretful Horn,’ ‘Flat Horn’ ‘Knotty Horn’; and for those keen on Chinese chess, they take the names of their buffalo from all sorts of chess pieces like ‘General,’ ‘Elephant,’ ‘Scholar,’ ‘Chariot,’ ‘Canon,’ and ‘Horse.’Only after watching the scene of the boys Tinh, Toan, and Sao galloping along, racing against one another on the backs of the water buffalo, and then bathing them and picking their ticks amidst the wetland fields did I realize why youths are so drawn to the buffalo trade. Just shout their names loudly, and the buffalos obediently come running towards their masters. As the sun sets, the youths are quick with their hands and feet, some lighting straw while others spread mosquito nets for the buffalo in a practiced manner.When they come to the age of nine or ten, the boys are allowed by their parents to become heads of their own buffalo herds—with each buffalo valued at three to four million dong—so that they may tirelessly seek faraway fields for several months before returning. It is only thus that we come to understand that the business of letting the water buffalo roam free is very arduous and necessitates expertise. That evening, an additional flock of buffalo came running from the floods at the border to join the band of herdsmen along with rich tales of sickly and well-fed buffalos that had been all over the fields. Ms Em still sat on the back of a water buffalo like a cavalier, while the youths led the buffalos that were full on straw out to the flooded fields to bathe, and the peasants prepared to light straw to ward off mosquitos for the buffalos that had newly joined.Images of Uncle Tu Dinh and the little boy Nhi in the writer Son Nam’s piece ‘The Season for Letting the Water Buffalo Roam’ and the untrammelled peasants of the Southwest region back in the days during the reclamation of these regional lands came rushing into me that evening, and I had faith that the season for letting the water buffalo roam free could never vanish from these lands.