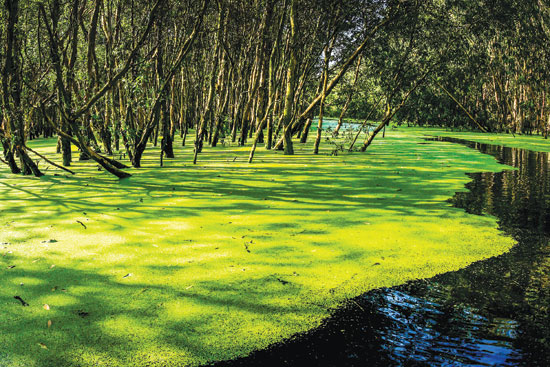 Where the fairy fern grows

During the high-water season from September to November, water ferns cover the surface of swampy cajuput forests, creating a beautiful natural scene.
The most attractive in the Western South is the Tra Su Forest of Van Giao Commune, Tinh Bien District, An Giang Province.
Occupying about 845 ha, it is known as a pristine forest with a diverse ecosystem. The most prominent flora is cajuput. The fauna includes many rare species listed in Vietnamâ€™s Red Data Book: milky storks, lesser short-nosed fruit bats, Indian egrets, walking catfish, painted storks, darters, and many others.

The deeper we go, the more fairy-tale-like it is. Pure white cajuput flowers in full bloom fill the air with a soft aroma. Lotuses and water-lilies do a catwalk on the water. Bright yellow Sesbania sesbans are waving in the wind. Care-free birds land on trees and ferns as if we werenâ€™t there. Hung and Khoi, two famous â€˜trampersâ€™ from Dong Nai Province, who were in the boat with me, said, â€˜Itâ€™s worth the time and the road, really. Itâ€™s so beautiful here. We will definitely come back here with a few more friends.â€™

After 10 minutes on a motor-boat, we came to a small boat dock. We changed to a smaller boat to row further into the woods to see the biggest cajuput trees. The birds here are talkative and make the forest noisier than the city. Mr Nguyen Van Tuan, our boat guide, told us there are over-30-year-old cajuput trees here, which host rare birds from the Vietnamâ€™s Red Data Book such as painted storks and darters. There are plenty of fish in the water, including many scientifically valuable species which are on the brink of extinction. The forest is prettiest during the high water season, especially at dusk and dawn, when thousands of birds come in wave after wave.
Then we were taken to a watch tower to take a view of the whole forest.n

*The article appeared in a different form in An Giang Newspaper, 16 October, 2014