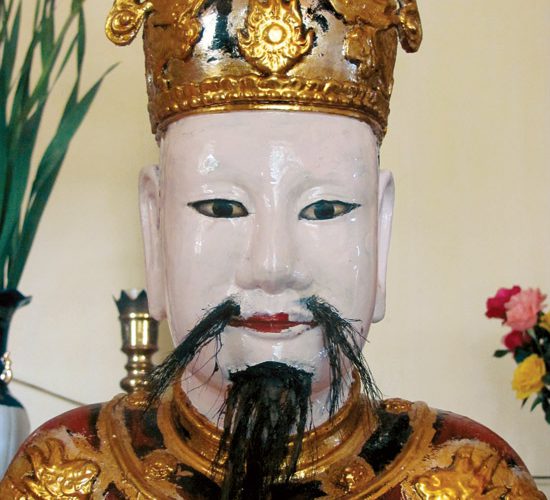 Work in progress at the Golden Tortoise Pagoda

It was a couple of years since I had visited Kim Quy Pagoda, the Pagoda of the Golden Tortoise in the rural outskirts of Hanoi. Thay Nhan, the monk, had invited me back there over the phone many times, but I had been reluctant to return, after learning he was knocking the old temple down. I wanted to cherish my memories of how it was, when I first stayed there in the autumn of 2007 and again at Tet 2008 and several times since. There was a special ambience around the collection of archaic Buddha statues inside the tiny, dimly lit temple.
Last December, I was on my way to China by train and felt I couldn’t be in Hanoi, without paying Thay a visit. On my very first trip, he had picked me up from the airport in a taxi, with a translator on board, to take me the 70km to his pagoda; on another occasion he had driven the 50km on his motorbike to pick me up from Hanoi train station. More recently I had made my own way there by bus, but it had been a while.
This time I was lucky to have Hoi in town. She was a young woman from Thay’s village, whom I had befriended that Tet. Now she worked in Hanoi and we had a chance to visit in the evening, then she kindly picked me up next morning and deposited me at the bus stop before going to work. There were a couple of phone calls to Thay to coordinate the timing and the drop-off point in the vicinity of the temple.
On the first bus, the local to Ha Dong, a too-loud, crackly radio spat out music and talk, interspersed with stop information in a female Hanoi accent with an echo, giving it a surreal, breathless quality. And plenty of horn-honking, of course, too. All for a mere 3,000 dongs. The bus did not stop at the terminal as before, to my confusion, but a friendly xe ôm driver brought me a short distance, after another call to Hoi and having the right second bus pointed out.

‘I was both surprised and relieved to walk into a room full of the old statues from the former temple. An old man was restoring them and the new paint really brought them to life.’

As I was only staying overnight at the pagoda, I had left my big bag with Hoi and taken just a small backpack. Just as well, as the second bus was packed to bursting most of the 90-minute journey. The driver honked constantly, drowning out the Vietnamese pop music he was playing. It was a horrible road, full of big, horn-blasting trucks (these days, everywhere I go in Vietnam is full of trucks), plastic trash strewn on the roadside, plastic trash cascading down the banks of rivers, ponds empty of water, their muddy beds full of plastic, piles of building logs, mounds of red sand and white sand everywhere, smothered rice paddies. Quite a different vista from my previous trips on that road.
I got off the bus at the designated post office, to see the clouds of black smoke it had been spewing all the way. I was surprised to find no Thay to meet me, but a phone call from Hoi assured me he was on his way. The 15-minute wait afforded me the dubious pleasure of watching armies of trucks laden with sand roar past in both directions. Not the most relaxing trip of my life. Another surprise when not Thay but Mr Thang, the cook’s husband, came to collect me on his motorbike. I didn’t recognise him at first in the full-face helmet and was a little dismayed that he carried no extra helmet for me. (Thay was always so considerate of others.) But once on the bike, I was seriously terrified for my life among all those trucks and my head was cold. Seeing me with my hands on my head through his mirror, Thang gave me his helmet, which was a great relief.

On the last stretch, once he left the main road and we cut through ploughed fields, the aural abuse and visual affronts were left behind. Nipping through the labyrinth of village streets, piles of red bricks were signs of a lot of building happening there. And, as expected, the pagoda grounds on entry were a construction site of sand and bricks, a vista I was all too familiar with from living in Danang, the ‘developing city’.
To be received with the usual warm welcome from Thay and his staff and to feel the relative tranquillity of the place was good, but there had been many changes. A handsome young monk, recently ordained, was now staying there. One of the fish ponds had been filled in (the one which I had first noticed teeming with life and where I’d eyeballed a crab). In its place was now a vegetable garden and new vegetable plots surrounded the property. There was a modern kitchen, replacing once very basic cooking facilities. But the biggest and most apparent difference was the huge temple under construction on the site of the tiny old one. Though still just a wood and concrete shell, it was quite impressive. (Hoi had told me the villagers loved it.) A crew was doing plaster work under the curved eaves of the heavy, three-tiered roof.
We shared a sumptuous vegetarian lunch with beer (a surprise), while the plasterers ate duck (another surprise). It was Christmas Eve, after all, and I had brought mince pies and Christmas Pudding from Hanoi. The cook’s son, Diep, who on my first visit had been a shy ten-year-old amazed at the sight of a foreigner, was now a handsome teenager with a mohawk, constantly hunched over his iPod, and his demure older sister, Binh, had an incongruous spike in her ear. A young woman from Hanoi was there to recover from splitting up with her sweetheart. She occasionally took breaks from text-messaging to talk to me and translate for Thay.

Reconnoitring after lunch, I soon noticed the change in the house where I had originally stayed, and would stay again that night; it now had a second floor, with covered steps leading up on both sides. Previously there had been only one stairway up to the flat roof, from where I had first got an overview of the village and on which two young boys had spectacularly flown their kites. Mounting the steps, I was both surprised and relieved to walk into a room full of the old statues from the former temple. An old man was restoring them and the new paint really brought them to life. All told there were ten Buddhas and bodhisattvas, five sages and two protectors. Some stood randomly, rather than in ascending tiers, and, in the natural light, I could see the distinctive features and character of each.
A phone call from Thay brought me running down and across the few yards to his building. Apparently he just wanted to know where I was and promptly disappeared for his afternoon nap. Technology had also encroached in the form of an electronic mantra-box, playing ‘Nam mô a di ?à ph?t’ on a loop in Thay’s building and mine. The harsh digital male voice was irritating me so much by bed time that I (guiltily) unplugged it.
Next morning I got an hour alone with Thay to practise some Chinese before my big journey. He amused me with his reading glasses and scholarly manner. It was sweet time together reminiscent of the closeness I had felt my first week there in 2007, when I barely spoke any Vietnamese. Then it was time to depart, on the back of the young woman’s motorbike. Leaving the village across the rickety floating bridge, I turned to see a colourful avalanche of plastic trash down the bank, my last sight of the bucolic haven before hitting the highway for a hair-raising ride back to Hanoi.
Modernity has asserted itself at the pagoda more with each of my visits but I still look back with nostalgia to that time when it was sleepy and traditional and taught me so much about rural Vietnamese culture.n